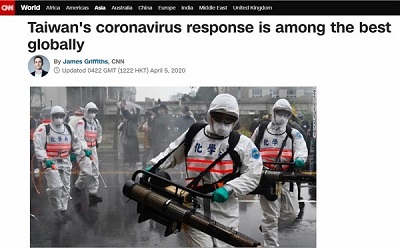 In a Sunday (April 5) article titled “Taiwan’s coronavirus response is among the best globally,” CNN recognized the island country’s efforts in fighting the Wuhan coronavirus (COVID-19) despite having strong links with China.

The article noted that both Taiwan and Australia confirmed their first four COVID-19 patients on Jan. 26 but that while the latter had since seen nearly 5,000 infections, the former had had fewer than 400. The article urged countries worldwide to take a look at what the Taiwanese government did right.

The piece noted that Taiwan was one of the worst-hit areas during the 2003 SARS outbreak, which took 181 lives on the island but also taught local officials “hard-learned lessons” about how to respond to similar outbreaks in the future. It added that Taiwan’s Central Epidemic Command Center (CECC) was set up in wake of the SARS crisis and that this has proven to be key to the country’s success in limiting the spread of the virus so far.

As for the current crisis, the author observed that Taiwan had responded swiftly and implemented several precautions by early January, including travel bans on most Chinese travelers, while other countries were still debating whether to take action. The report further pointed out that the Taiwanese government’s transparent daily updates and decision to increase local face mask production have contributed to the country’s relatively low number of COVID-19 cases as well.

Regarding Taiwan’s exclusion from the World Health Organization (WHO), he stated that China has blocked Taiwan from participating in global organizations due to Beijing’s “one China” policy. It also mentioned the recent controversial interview between one Hong Kong journalist and WHO Assistant Director-General Bruce Aylward, who had refused to acknowledge Taiwan’s success against the coronavirus.

In response to those who have suggested that only autocratic governments, such as China’s, are capable of controlling the fast-spreading virus, the article said Taiwan was proof that democratic governments can be just effective, noting that unlike its authoritarian neighbor, Taiwan has been able to achieve its prevention goals without having had to order regional lockdowns.