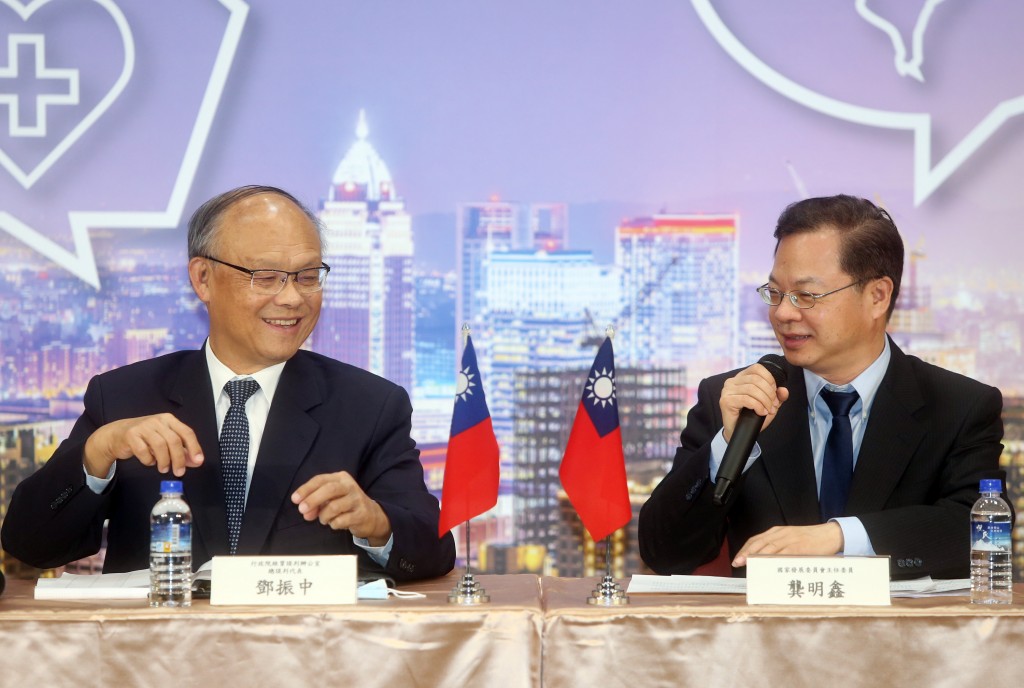 With the APEC Ministerial Meeting kicking off virtually on Monday evening (Nov. 16), the Taiwanese delegates pledged to enhance ties with Asia-Pacific nations while contributing to global health amid the pandemic.

In light of the ongoing coronavirus pandemic, all APEC meetings leading up to the Economy Leaders’ Meeting on Nov. 20 are going entirely virtual this year, including the ministerial meeting at 8 p.m. on Monday.

John Deng (鄧振中), top trade negotiator for the Cabinet, and Kung Ming-sin (龔明鑫), minister of the National Development Council (NDC), held a morning press conference to report what they will be presenting to APEC members in the evening.

The APEC delegation will strive to fulfill the two goals laid out by President Tsai Ing-wen (蔡英文) last week, including strengthening ties with other countries as Taiwan seeks an instrumental role in the reshaping of global supply chains, said Kung.

The minister said he will emphasize the country’s outstanding economic performance amid the coronavirus during the meeting.

“Taiwan has become one of very few countries around the world to have managed to maintain a positive economic growth this year,” observed Kung.

He attributed the result to effective disease prevention measures and fiscal stimulus policies.

Kung will also reiterate Taiwan’s capabilities and willingness to share its expertise in public health with APEC member states.

“Taiwan has long had the advantage in information and communication technology and medical industries, and I will take this opportunity to express that we are willing to make more contributions to the world’s disease prevention efforts as well as health, especially in digital health,” noted Kung.

Taiwan will also champion free trade and multilateralism, according to Deng. “Our stance is that unless it is within the necessary scope, all members of APEC should keep economic and trade activities free and open,” Deng said.

With the Regional Comprehensive Economic Partnership (RCEP) signed by 15 countries across the Asia-Pacific last week, many in Taiwan have expressed concern that the country will be furthered marginalized. Kung said that the tariff reductions to follow RCEP’s ratification are likely to have a greater impact on traditional industries than on the technology industry.

The government will confer with business representatives as it mulls a response, said Kung. He went on to say that possible actions include seeking to join the Comprehensive and Progressive Agreement for Trans-Pacific Partnership (CPTPP) or pushing for industrial transition and digitalization.

Civic groups have been calling on the government to propose an Asia-Pacific court of human rights during this year’s APEC meetings as a way to hold Beijing accountable for its oppression of religious groups, dissidents, and pro-democracy protesters in Hong Kong.

However, Bob Chen (陳龍錦), a senior official at the Foreign Ministry, responded that this will not be on the agenda. APEC is a platform that focuses on economic affairs, trade, and investment, and it has never touched upon political and human rights issues since its inception, said Chen.