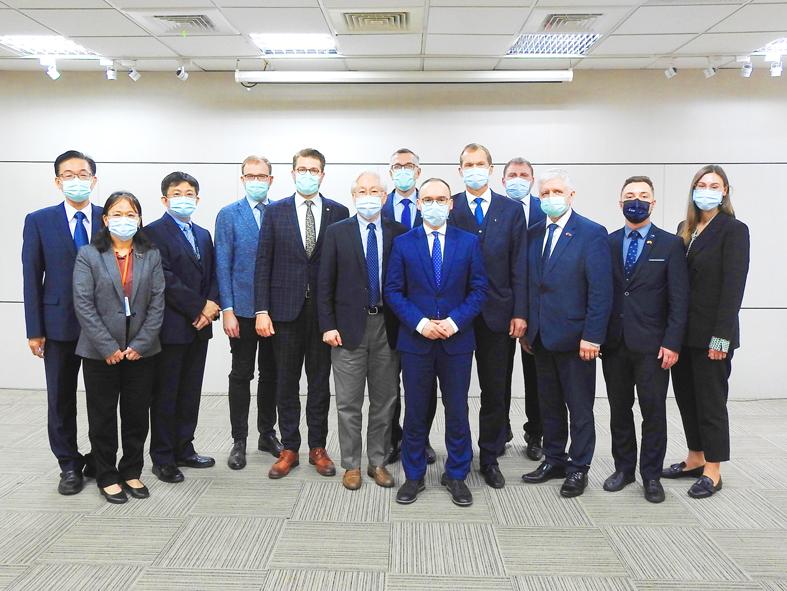 Taiwan is to boost cooperation with Baltic countries in quantum computing and biotechnology, the Ministry of Science and Technology said yesterday after a meeting with a delegation of visiting lawmakers.

Lithuanian Member of Parliament Matas Maldeikis is leading a delegation of nine other lawmakers from Estonia, Latvia and Lithuania who arrived in Taiwan on Sunday.

After meeting with President Tsai Ing-wen (蔡英文) and Minister of Foreign Affairs Joseph Wu (吳釗燮) on Monday, the lawmakers yesterday visited Minister of Science and Technology Wu Tsung-tsong (吳政忠), who in October visited the Czech Republic, Lithuania and Slovakia.

At the meeting yesterday, the two sides discussed developments in biomedicine, semiconductors and science parks, with the visitors saying that they support deeper tech cooperation between Taiwan and their countries, the science ministry said in a statement.

The delegation’s visit is expected to elevate the nation’s visibility on the global stage and promote its leadership in tech developments, the statement said.

Estonia, Latvia and Lithuania are EU members, but have different technology policies and levels of development, it said.

Through Taiwan’s tech and research policy blueprint, the science ministry has identified quantum computing and biotechnology as key areas to advance cooperation with the three countries, it said.

The delegation tomorrow and on Friday are to attend the virtual Open Parliament Forum, cohosted by the Legislative Yuan, the Ministry of Foreign Affairs and the US National Democratic Institute.

The foreign ministry did not say when they would leave Taiwan.