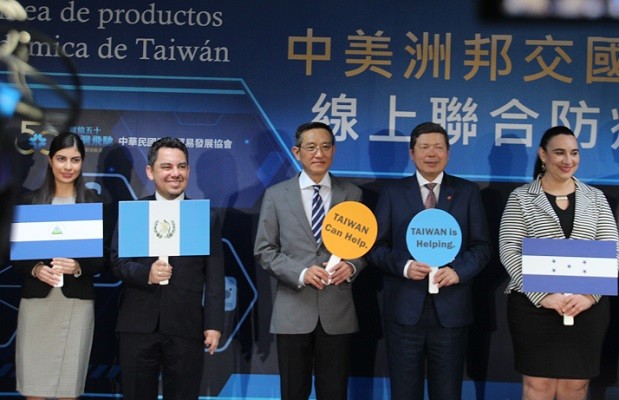 Representatives from three of Taiwan’s diplomatic partners in Central America delivered remarks on successes achieved by the Taiwanese government in its pandemic prevention efforts. In attendance were Ambassador Willy Goméz of Guatemala, Minister Counselor Mirna Rivera of Nicaragua, and Ambassador Bautista Guevara of Honduras.

“The global challenge that we are facing has hinted at the importance of solidarity with both your government and institutions from the private sector and civil society,” Guevara said, adding that Taiwan has contributed to Honduras’ achievement of the goals “that will be defined by the post-COVID era”: restarting the economy, creating jobs, and social protection.

Minister Counselor Rivera in her remarks praised Taiwan for “sharing its experience in health crisis management” in a transparent manner. She also credited Taiwan’s industries for being an invaluable part of the government’s successful response.

During the product portion of the event, Arbor Technology Co. (磐儀科技股份有限公司) promoted its portable temperature and AI mask-wearing screening station, which can be set up at key entrances to rapidly screen for people with high body temperatures. At the Derekduck Industries Corp. (德瑞格股份有限公司) table, conference attendees were introduced to the company’s hazmat suits, which it touts as optimum protection for frontline workers.

Kim Forest Enterprise Co. (金萬林) summed up the capabilities of its COVID-19 rapid test kits, which it says can detect multiple virus strains and thus reduce the chance of false negatives. Yi Ting (易廷企業有限公司), which specializes in products made from non-woven fabrics, presented its line of masks, which have a QR code on the packaging for purchasers to verify the products are legitimate — an answer to the counterfeit “made-in-Taiwan” masks that have been making the rounds.

Diplomatic allies beyond Latin America have also lauded Taiwan for its efforts to trace and contain the coronavirus.

Palau’s representative to the United Nations, Ngedikes Olai Uludong, told Taiwan News that Taiwan has “provided some of the most essential equipment to establish [COVID-19] testing capacity, including sending technical experts to train our health workers on how to conduct these tests.” The Pacific island nation, which has recorded zero coronavirus cases, has repeatedly voiced support for Taiwan’s admittance to the World Health Organization.

Beyond the countries that diplomatically recognize it, Taiwan has flexed its pandemic-era soft power throughout Europe, the Americas, and Asia, with the government and private entities alike making donations of ventilators, test kits, and millions of masks and other personal protective equipment.