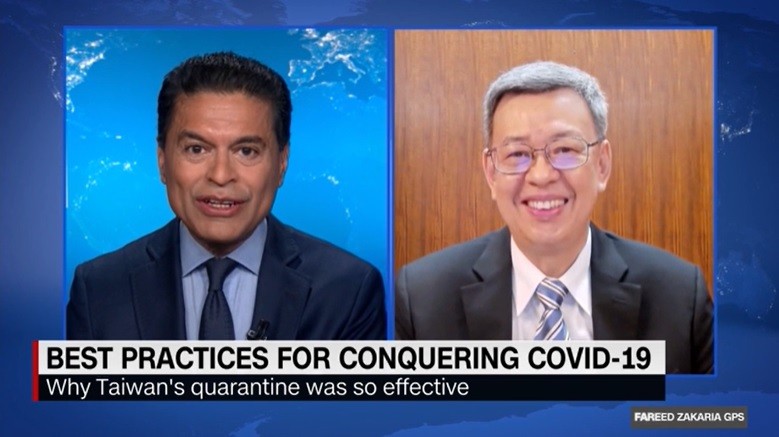 CNN journalist Fareed Zakaria on Sunday (Sept. 13) praised Taiwan for its extraordinary handling of the Wuhan coronavirus (COVID-19) and suggested that its universal healthcare system played in an important role.

In a program titled “On GPS: Learning from Taiwan’s Covid-19 response,” Zakaria pointed out that Taiwan is almost always at the top of any list of countries that have handled the pandemic extremely well, with less than 500 cases and only seven deaths. Zakaria observed that the U.S., in contrast, has had 2,000 times the number of deaths and 1,000 times the number of infections as Taiwan per capita.

Zakaria said that some of the credit goes to former Taiwanese Vice President Chen Chien-jen (陳建仁) who is a Johns Hopkins-trained epidemiologist and was at the helm when the outbreak started. Chien said that the problems in the U.S. stem from a lack of recognition early on of the infectiousness of the disease and a failure to take the necessary steps to prevent its spread, such as personal hygiene, social distancing, and avoidance of large gatherings.

He said that the lockdown of cities seen in some parts of the U.S. was not the optimal method to control the spread of the virus. Instead, Chen advocated contact tracing and a “very stringent quarantine of close contacts” as the most optimal methods to control the proliferation of the contagion.

Zakaria then asked if Taiwan’s single-payer, unified healthcare system, health insurance card, and electronic information that is pooled centrally were “all key to being able to detect cases and trace back to potential infections?” Chien agreed, and he emphasized that Taiwan avoided mass lockdowns of cities and instead implemented “very stringent close contact tracing and tracking.”

Instead of mass screenings, Chien said that Taiwan carried out “very careful testing” of all those suspected of having the symptoms and signs. He remarked that this was more efficient and effective and it was combined with the mandatory 14-day home quarantine for those who came in close contact with confirmed cases.

Chien said that out of the 250,000 people in Taiwan who have been told to undergo 14 days of quarantine or isolation, 99.5 percent followed government guidelines. He said only 0.4 percent were penalized for venturing out of their restricted area during their quarantines.

Zakaria then recalled the experience of a friend who underwent the quarantine process in Taiwan and said that those quarantined are given a cell phone and placed in a hotel. He said that people “get checked on” and if they do not answer the phone and wander out, they will “get apprehended.”

Agreeing with Zakaria’s assertion that strict quarantines meant no major lockdown was required and businesses were able to stay open, Chien said that although 250,000 people had to sacrifice 14 days of their time, it assured that 23 million could “work normally and live normally,” thus reducing the economic decline in Taiwan.

When asking Chien about his criticism of Taiwan’s exclusion from the World Health Organisation (WHO), making Taiwanese “orphans in the health care system,” Zakaria recognized that much of the blame for leaving Taiwan out is China. Zakaria then asked Chien if China had deceived the world in terms of the COVID-19 outbreak.

Chien pointed out that Taiwan disease experts were already aware of a “huge group” of pneumonia cases in Wuhan in December “and they (China) did not report it to the WHO.” “If the WHO had received the information and helped China to contain COVID-19 in December in Wuhan I think the disease could be contained there quite well. There would have been no way for it to spread out to the whole world,” said Chien.

He added that Chinese authorities only treated severe cases in the hospital, while ignoring minor cases, allowing them to return home to spread the virus in the community. He said that allowing less serious patients to leave the hospitals caused the large scale outbreak in Wuhan.

When asked if the virus is “exhausting itself,” Chien warned that the first wave of the pandemic has yet to end and he called for continued vigilance.